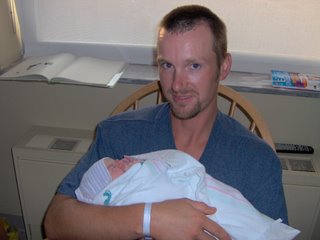 At 31, fatherhood finally came for my boyhood friend, Charlie.


He started in southern Missouri, then a stint in the Navy took him around the world more than once. A few years later he taught at the Academy in Pensacola, now he's out and settled in Maine. He looks happy to me - as if he understands that the real adventure is just now beginning.

We all have our dreams that keep us childlike. I can't imagine waking-up each morning without my dreams to feed from - you see, while others have 401k-plans, my dreams ARE my security. As long as I have them, I have a purpose. My daughter wants to be a writer and the other day my son Samuel stated he would be an artist. He's pretty hard-headed, so I assume his mind may be made-up on that issue. Hard to argue with influence. I suppose the best I can do is try that much harder to establish myself in the artworld, so he doesn't have as hard a road when it comes his time.

My father was a teacher and my mother an office administrator. Although neither was really the right path for me, I definately found more appeal in his career than her's. I stated before that pension plans and group benefits don't ring my bell quite as loud as they seem to for typical Joe-American. This is a strange path I've chosen for my little family and I'm fortunate to have a daughter that regularly asks, "where do we get to move next?" Or a wife that equally loves traveling and really gets into this whole "travel artist" idea. As a family, we're not sure which place sounds like the most fun for the next "best place": Maine, Alaska, Hawaii, Costa Rica, Ireland, Italy... Japan. They're all on the list and like the previous moves, we'll agree to hold hands when we jump. - DN
Posted by danielnorth.com at 12:27 PM

Maine looks so romantic, Alaska seems to be great fun but elise is leaving unfortunately, Ireland is great and very green (thousands of different green),Italy is unbelievable and Japan so magic...What about France?...hummmm...but the best place is Montana! (even if the place we bought is actually surrounded by the big Derby fire!) hi Daniel! I love your Blog!!thoughtful, sincere and moving.
Elaine

My daughter wants France, specifically Paris... I'm not sure if it was the private french lessons she had in Montana, or the Madeline books of which she was named. - DN

North, all those places sound exotic and beautiful, but I can't help this feeling in my gut that says your an Alaskan man. I feel you'll probably feel more at home than anyplace you've ever been (note, this is just a gut feeling). If I had to suggest a second, I feel you'd probably enjoy yourself more in Italy if alaska was crossed off the list

I spent some time in Italy (hiking, drinking wine and eating amazing food). I loved it and I have always imagined myself living there someday. Living in a little villa and spending my lazy afternoons painting. Ahhhh. I've been itching to go back so bad that I just booked a ticket to Venice for the Thanksgiving holiday. I'll email you some pics when I get back and I bet that will seal the deal for you. You'll be packing up the fam and heading to Italy before you know it!