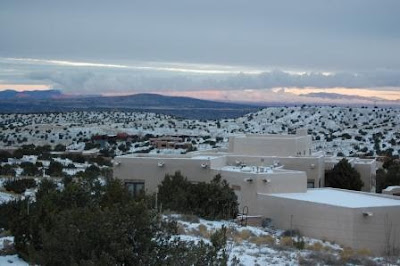 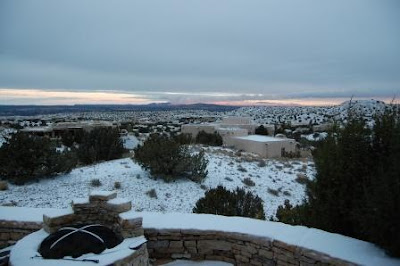 Woke to a high desert snow for Thanksgiving morn. Collected wood for the fireplace and am now waiting for my first slice of pie... -North
Posted by danielnorth.com at 8:33 AM 3 comments: 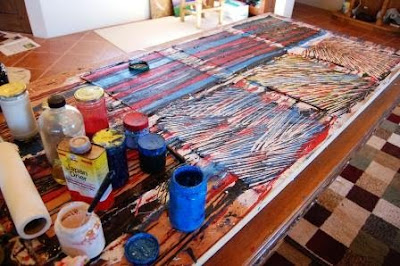 I awoke to a light mist in the desert. I’m still not used to the time-change; five o’clock is still too early but attempting to return to sleep never works out.

I had plans to stretch and gesso a large canvas, today. The idea was a finished painting in the neighborhood of 60”x80”. Last evening I went to bed with thoughts of much smaller works. I dreamt of miniatures along the lines of the past summer’s enamels; nothing larger than 12”x12”. Most in the 5”x5” frame, possibly, creating a mixture of oils and enamels with a goal of 300 new paintings by spring. It is supposed to be in the freezing temperatures, by midnight and remain throughout the coming days. I always loved using my long cold winters for inventory building. - North

Posted by danielnorth.com at 8:15 AM No comments:

“We were all young, and there was no such animal at the time as a master of fine arts degree, so the WPA really amounted to a graduate program in art. It was really the first art community I was ever aware of.” – Peter Busa, artist

The last few days, I have been reading about the WPA and how it benefited artists during the Great Depression. Visual artists were divided into two groups: muralists and easel painters. A muralist worked within a group, on a preset-project. Easel painters worked from their studio (on whatever project/design of their choosing) and had to deliver a new piece of artwork to the local WPA office once every 4-6 weeks. The WPA office owned and indefinitely stored the works (they have since, obviously, been placed in public collections). In essence, the WPA spear-headed the Modern Art movement, acting as its original patron; and when you think about the contemporary value of work by the Abstract Expressionists of this era… the government made a ridiculously smart investment. - North

Posted by danielnorth.com at 9:11 AM No comments: