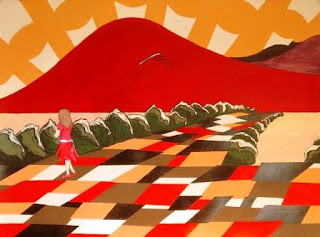 My young daughter, Maddie Scarlett, has had the unique burden of having a travel artist as a father. The subject of my paintings is as often in reference to the complexities of a travel lifestyle as it is a representation of the residents and lands we encounter. My wife and children exist within every painting just as they are present for each moment of my traveling life.

I don’t have a “problem” with traditional portraiture; so much as I take issue with any form of painting that takes place without a specific context. Great works such as the “Arnolfini and his Bride” by Jan van Eyck garner their importance from the other activity in the composition, besides the actual portrait. Even the Mona Lisa would not have quite the following if the background behind the figure was mundane. Of course critics believed that photography would unhinge the art world a hundred years ago; many traditional figure painters had delegated portraiture to simple boring ¾ view sittings… one has to stop and wonder if rather than painting was this “ignoring of context in portraiture” actually the original birth of the SEARS portrait studio?

Andrew Wyeth’s 60-year-old painting, “Christina’s World”, was the early harbinger for exactly the type of portraiture I find interesting. Obviously, there have been other painters in the last half century that have created this type of “Portraiture in Context”, but it has not become the mainstay staple of Americana, that anyone would have hoped. So there it is… the evolution of an old dream. Another possibility for changing the American artistic frontier in the midst of a middle America obsessed with bad mall paintings, price-gouging giclee faux-paintings and bad law-office portraiture. - DN
Posted by danielnorth.com at 8:40 AM

thats a really wicked looken picture, i like that one, i like the floor structure and the coloring where it draws your eyes to move along the road