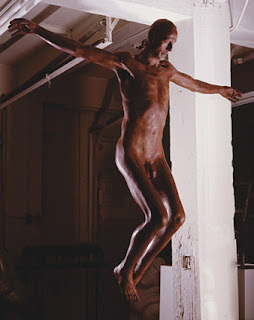 NEW YORK (Reuters) - A Manhattan art gallery canceled on Friday its Easter-season exhibit of a life-size chocolate sculpture depicting a naked Jesus, after an outcry by Roman Catholics. The sculpture "My Sweet Lord" by Cosimo Cavallaro was to have been exhibited for two hours each day next week in a street-level window of the Roger Smith Lab Gallery in Midtown Manhattan. The display had been scheduled to open on Monday, days ahead of Good Friday when Christians mark the crucifixion of Jesus. But protests including a call to boycott the affiliated Roger Smith Hotel forced the gallery to scrap the showing. "Your response to the exhibit at the Lab Gallery is crystal clear and has brought to our attention the unintended reaction of you and other conscientious friends of ours to the exhibition of Cosimo Cavallaro," Roger Smith Hotel President James Knowles said in a statement addressed to "Dear Friends." "We have caused the cancellation of the exhibition and wish to affirm the dignity and responsibility of the hotel in all its affairs," the statement said. The Catholic League for Religious and Civil Rights had called for a boycott of the hotel, writing to 500 religious and secular organizations. "This is an assault on Christians during Holy Week," said Kiera McCaffrey, director of communications for the league, which describes itself as the largest U.S. Catholic civil-rights group. "They would never dare do something similar with a chocolate statue of the prophet Mohammad naked with his genitals exposed during Ramadan," she said before the cancellation. The archbishop of New York called the sculpture "scandalous" and a "sickening display." "This is something we will not forget," Cardinal Edward Egan said in a statement. Matthew Semler, the artistic director of the gallery, said earlier that the hotel had no knowledge of what the gallery planned to show and was being unfairly targeted. Moreover, he said the work was not irreverent. "It's intended as a meditation on the Holy Week," Semler said of the sculpture, which depicts Jesus as if on the cross. Easter Sunday, this year April 8, is celebrated as the day of Jesus' resurrection. A photo of the piece on the artist's Web site (http://www.cosimocavallaro.com/) shows the work suspended in air. New York is familiar with clashes between art and religion. In 1999, then-Mayor Rudolph Giuliani tried to withdraw a grant from the Brooklyn Museum of Art for a painting depicting the Virgin Mary as a black woman splattered with elephant dung adorned with cut-outs from pornographic magazines. Current Mayor Michael Bloomberg took a different approach. "If you want to give the guy some publicity, talk more about it, make a big fuss," Bloomberg told WABC radio. "If you want to really hurt him, don't pay attention." © Reuters 2007. All Rights Reserved.

I’m not a Bloomberg fan, but I have to agree with him on this one. There is no such thing as bad publicity. On that same note, despite related emotions regarding the subject of the work, one would be hard-pressed to deny the amazing execution of the actual sculpting of this life-size figure in chocolate. – DN
Posted by danielnorth.com at 1:58 PM

I was always disappointed to find out a chocolate Easter bunny was hollow, not solid chocolate. This leads me to the only obvious question.... Would I be disappointed with this Jesus?

I must say, it's very well done, but seriously, Even I am slightly offended by this, and I watch Family Guy. Drawing comics of Muhammed is considered worse than Taboo, but this is art.

I don't question for a minute that this is art. I question if it is in good taste; but not if it qualifies as art. The most common explanation for contemporary artwork "not being art" is it's lack of technical merit... I believe this sculpture boasts technical skill in spades. - DN

I think it's cool. Why do religious zeal have to be offended by sexuality? We all have it, don't we?????? I guess I am insensitive or am I missing something?
JN