I ran across this online and once I saw it nothing else I could write about seemed as impressive. - DN 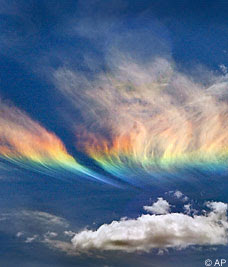 Rainbow over the Washington-Idaho border

In a breathtaking blaze of glory, Nature puts on one of its most spectacular sky shows. Reds, oranges, blues and greens create a flaming rainbow that stretches above the clouds.

But this circumhorizon arc, as it is known, owes more to ice than fire. It occurs when sunlight passes through ice crystals in high cirrus clouds. It is one of 15 types of ice halos formed only when the most specific of factors dovetail precisely together.

This blanket of fire, covering hundreds of square miles, is the rarest phenomenon of them all. It was spotted in the US on the Washington-Idaho border around midday last Saturday.

Dr Jonathan Fox, of the US National Weather Service in Spokane, Washington, said: 'It was even more spectacular than the Northern Lights. I feel lucky to have seen it because it only forms in very rare situations. This is the first one I've ever seen. It was a breathtaking sight and it hung around for about an hour.'

To create a rainbow of fire, clouds must be at least 20,000ft high and the ice crystals within them align horizontally instead of their usual vertical position. The sun also needs to be at least 58 degrees above the horizon. Then, the magic can begin.

Posted by danielnorth.com at 10:51 AM