Monetization of art and the building of collections are often to the detriment of the work.  While I like a buck as much as the next guy, I recognize the conundrum that money poisons the well of creativity.

Today, Impressionists paintings are easily shrugged-off by the serious contemporary collectors and critics as beauty for beauty’s sake.  Fluff is an even coarser description.  While the works of artists such as Monet and Degas are indeed pleasurable to look upon, they must be viewed primarily as explorations.  While artists such as Renoir grew old and comfortable in their style, a few of the Impressionists continued to explore painting and color theory with the same fervor that initially led the father of Impressionism, Edouard Manet, to create “The Fife Player” and “Luncheon on the Grass”. 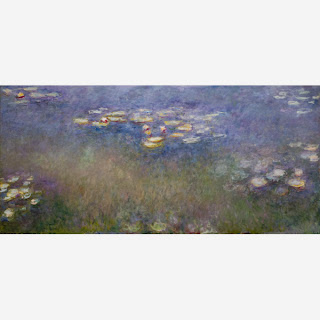 Monet’s Water Lilies triptych (1915-1926) is the perfect example of overblown beauty that one can walk into and absorb into their skin, immediately recognizing the mental labor spent on its creation. The layering of colors make the canvas glow to a near effervescent shimmer, but technically Monet was simply an old man with failing eyesight, attempting to master the ultimate illusion of color.  This was not a one-off painting created for profit.  It took nine years to complete and the size, alone made it unsaleable to a single person or institution.  Once completed, it stood as his Opus in a life’s search for scientific qualities of light and color, visualized.  He was so enamored by the piece that he kept it in his personal collection until his death.

However, the beast that is capitalism has forced the separation of the pieces between three museums (St. Louis, Kansas City and Ohio).  How can the best interests of the work be held higher than the celebrity of the artist, if the institutions set-up to champion art for the people is mired in the politics of acquisitions and patronage?  Monet was only able to create this nine-year masterwork thanks to his success.  Yet, during his life he kept the painting close for constant re-observation, refusing to separate the triptych. -North
Posted by danielnorth.com at 11:11 AM