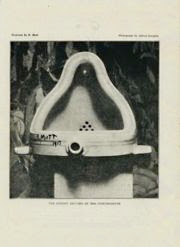 Some of the most beautiful works of art humans make aren't found in museums but out in the real world; so maybe a car should win for best piece of contemporary art? The Observer (UK) 02/04/07

While the above article primarily concerns itself with the beauty of modern cars; I wonder if the same theory can be put forward for other examples of modern technology. The majority of Apple’s products over the last ten years have been breathtaking in their simplistic color schemes and use of minimalist lines. Is this type of appreciation for the aesthetic quality of everyday objects, an evolution of the basic premise behind Duchamp’s Dadaism (the art we love to hate)?

In 1998, the Guggenheim held a successfully received exhibit titled “The Art of the Motorcycle”; in this ongoing onslaught of industrial and commercial art, where does the lone painter fit-in? How does the painter find continued relevance in the information age? Replicating the trend of innumerable religious groups down through the ages, small bands of artists (including some I’ve mentioned here recently – wink, wink… nod, nod) have taken the stance of refusing the acceptance of socially-influenced artistic progress and intellectual growth. How long can these artists stand against progress? What achievement is made on the painting front without a common recognition of multiple art forms? From a financial standpoint, I would be screwed if every artist in the world were to decide to drop their respective mediums to pick-up the brush. I’m grateful for the ideas I can cull from my exposure to fellow sculptors, architects, industrial designers and conceptual artists. We are all part of a greater aesthetic eco-system that feeds the artistic needs of one another. – DN

Posted by danielnorth.com at 9:52 AM

Interesting article on cars. A car is a car however and a painting is a painting. Maybe painting should emphasis more huh, art? or beauty? instead of trying to look like simplistic aesthetics like the pottery barn stuff. Or perhaps art should be eye pleasing and useful? like the color of money.