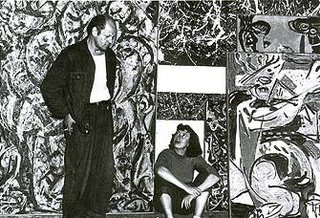 Jackson Pollock and Lee Krasner
It is largely understood that much of Pollock’s work was influenced (if not directed) by Krasner. Did she give philosophy to his form or was it him giving form to her philosophy?

A few weeks after moving to New Mexico, I was offered a show at a gallery that was a bit more off the beaten path than I found comfortable. Needless to say the director saw the extensive collection of work on my website and it made an impression… so much so that I saw an advertisement for similar work by another artist at his gallery, eight months later. The basic scroll and tamrisk stick presentation, as well as, the literature references had been liberated from my mind to be used by another. Upon further inquiry, I learned that the artist-in-question was not a painter, but rather a poet. In a brain-storm-forum, she met with the gallery director and another individual and they “came-up-with” the scroll format. The actual paintings were tiny, 9”x12”, on average. Minuscule compared to my own much larger works. Her scrolls were not even paintings, so much as they were collages with her poetry or other more famous works scribbled across the front. At first I was shocked, next came despair… and finally relief. On one hand my idea had been stolen (keep in mind I stole it's basic concepts from the orient); on the other hand I had created something worthy of imitation.

I was visiting with someone I barely knew, at the farmer’s market, this morning. He mentioned my scrolls and said that since seeing mine, he had started making some as well. He asked where I learned the style and I simply declared – “I made it up”. Despite the obvious cross-cultural influences of my style, I’m still confident in the validity of my statement. I took my ideas from the Asian cultures in an attempt to expand the thoughts and training of my photo-realist youth; but it still feels as if the concepts that motivate my hands to move across rice paper, wood and canvas are as much mine as the children that play at my feet as I paint. – DN

Posted by danielnorth.com at 1:38 PM