Those Chinese Make Everything! 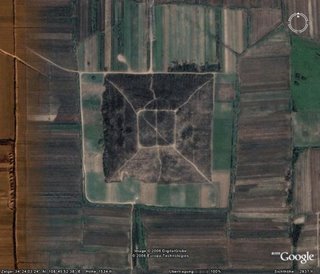 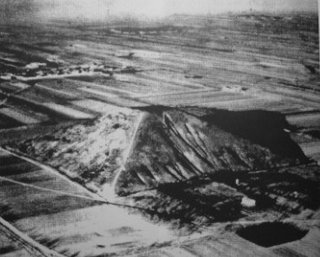 Pic from the 1940's of the White Pyramid

Somehow I missed the high school history lesson that mentioned pyramids in China:

During the second world war, the pilot of the American Air Force, James Gaussman, with his co-pilot, flow - through a technical defect at his machine -, for several times over a specific territory in China. What he later reported sounds completely unbelievable: "I banked to avoid a mountain and we came out over a level valley. Directly below was a gigantic white pyramid. It looked like something out of a fairy tale. It was encased in shimmering white. This could have been metal, or some sort of stone. It was pure white on all sides. The remarkable thing was the capstone, a huge piece of jewel-like material that could have been crystal. There was no way we could have landed, although we wanted to. We were struck by the immensity of the thing", the pilots reported.

On March 28, 1947 the "New York Times" reported about that discovery. In an interview with the newspaper, the former far east director of the Transworld Airlines, Maurice Sheahan, says he has seen 40 miles southwest of Xian a gigantic pyramid."I was impressed by its perfect pyramidal form and its great size," says Sheahan.

With the exception of a brief break to pick-up my daughter at school, I painted for a solid fourteen hours, yesterday. In that time I put the finishing touches on four landscapes, started two new paintings and stared at an unfinished figurative piece. All that work and yet I still question my artistic value to future generations. Will these huge blocks of time I spend within myself be worth the loss of time to my family?

I look at something as insurmountable as pyramids and wonder – How can my own work ever match their grandeur? Then I remember… we don’t have specific artists’ names for those structures. As far as the artists in history we do recall, such as the famous “Old Masters” – sure, Leonardo da Vinci only completed a handful of paintings and sculptures in his lifetime, but the on-going importance of his work is mostly based around his nearly prophetic theories and inventions (and of course books that take liberties with his shadowed life haven’t hurt him from a general PR stance, either). So does that mean art is always more about the original concept than technical prowess, historically? Why did the Chinese pyramids go relatively unmentioned in the western world until the 1940’s? Was it because it was more of the same? Been there, done that – in Egypt and Central America (as well as massive non-pyramidal burial mounds throughout the rest of the world). Is thinking outside the pyramid the motivating direction for art? – DN

Posted by danielnorth.com at 9:37 AM