We all seek our fifteen minutes, even if we don't care much for who it is with... 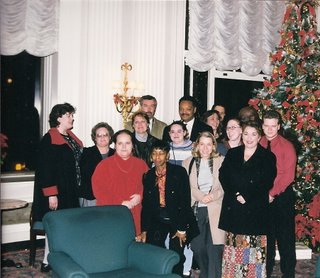 Bill Clinton recently turned sixty. I wasn’t a fan while he was in office, but I am certainly missing the “good ole days”, now. Maybe they weren’t so great, but they sure seemed better in retrospect. What do I like about him? – Well certainly not his wife. Hilary gives me the same type of night sweats that I felt every time I saw Teresa Heinz-Kerry on the television, two years ago. I suppose my interest in him has to do with his humble beginnings. Sure he went to the best colleges and did more than his fair share of questionable deals to get to where he is in life; but so does every other politician and most of them didn’t start out poor, with only one parent, in rural . is often (mistakenly, I believe) compared to JFK; but the issue of humble beginnings is the one factor where actually trumps the great Kennedy. I have never met Bill, so I can’t attest to his notorious charismatic nature (though I did meet Jessie Jackson once, in DC at the Washington Hotel and that guy had an entourage reminiscent of the Pope). My point is this – humble beginnings… self starter… relentless dedication to your dream because no one else will achieve it for you.

Above is a picture of my group with Jessie Jackson in the lobby of the Washington Hotel. We were a group of museum directors that received Nathan Cummings Fellowships to go to DC and work at the Smithsonian as curators on their first on-line-only exhibition. JJ is the tall black guy in the back that looks like Jessie Jackson; I’m the pasty white guy on the right end in the red shirt. That was seven years ago, so a lot has changed. During my recent visit to the my family referred to me as “Grizzly Adams”, because of my long hair and beard. Additionally, I now tend to stand on the left side of most picture-taking opportunities and wear an orange shirt. – DN

Posted by danielnorth.com at 9:54 AM