Art Movement of One or Many? 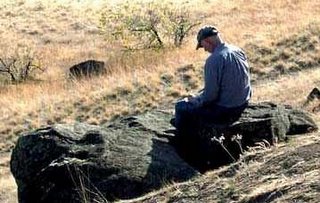 The above link will take you to the archive of Joel Weishaus. His work is controversial by the very nature of its perception. Is it literature, is it documentary, is it visual art?
For example:

THE DEEDS AND SUFFERINGS OF LIGHT

These texts were originally made for an exhibition at the Albuquerque Museum that opened on May 19, 1991 and ran for 24 days. The forty texts were presented as posters spanning the walls of two rooms, intersticed with photographs by Patrick Nagatani. Here they are presented in their original format, however digitized and somewhat revised. --Joel Weishaus

Take a look at his work, but I warn you it will require more than a casual glance to digest the purpose of the art. In addition to the above example of texts and images (photographs), he also has an archive of traditional visual forms - both 2-D and 3-D. Where does Mr. Weishaus fit into the mode of Artist? Author? Documentarian?

Is it possible for a blend to take place between the concepts and imagery put forth in his texts and other works, to expand upon a theme into a greater cause or movement?

Or is his work an example of the greater cause?

Can the individual artist be the movement, without inclusion? Think of the great masters of visual art - How much of Picasso was the Cubist and Modern Art Movements and how much was just Picasso?
-DN

Posted by danielnorth.com at 11:32 AM