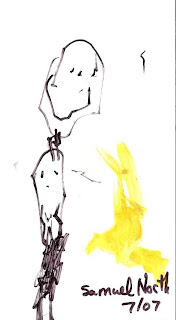 My son has already acquired an interest in working with non-traditional painting media. This painting, along with ten more, was completed a month before his fifth birthday. Since that time he has started an intensive pre-school program that has been wonderful for his social development and maturity, but has done serious damage to his natural artistic technique. That nice three-dimensional figure you see above has been replaced with traditional stick figures with scribbles for bodies. Today, when we work in the studio, we’ll have to practice the process of unlearning what I refer to as… idiot-socialized art (the faux-modesty that occurs when a student joins a group of peers and suddenly prefers to paint or draw like everyone else in order to be accepted as “nothing-special”).

Which brings me around to narratives. Stories about life, seemingly insignificant moments in time, and what happens to dreams when mortality gets in the way. That special desire to be accepted as less than exceptional, particularly in the South and Midwest… Garrison Keillor has used the ideal as the basis of his writing and radio program for nearly forty years. That concept that extols – what’s good enough for one man should be more than enough for a generation.

But I’m alluding to the negative, again; who’s to say mortality can’t emphasis rather than unravel a fantasy of self-confidence and artistic alienation. After all, it’s the richness in the details of existence that make life worth living.

Abstract concepts in a literal world, occasionally, are harshly received. I’ve previously mentioned my admiration for the writings of John Haines. A painter turned poet that wrote every word like the scratch of a minimalist painter searching for the perfect brushstroke. His beautiful genius for detailing metaphors from analogies is a rare find in the most perfect of situations. However, it was even more out of place for an east-coast native with an on-again, off-again romance with mid-twentieth century Alaskan homesteading. Innumerable winters and a couple wives later, he was suddenly old. No longer in the place he loved. Instead he was conducting readings in New York and other university-infatuated cities along his book tours. He learned his lesson and returned to the source of his passion, unfortunately… naturally, though… lives continued while he was away. The best moments seemed to have passed into realms of technology and we only have his poems and prose as a record of that time as a path to relive it. His best poems and stories were the ones derived from chance encounters with locals along lonely hunting excursions and the very occasional all-night storytelling camps with fellow sourdough dreamers in remote shacks reserved as meeting places originally intended for joining men with whiskey.

Humans are social beasts, but that does not mean that we should lose our individuality for the prospect of further association; quite the contrary, it is our individual character that defines our purpose. – DN
Posted by danielnorth.com at 7:05 AM