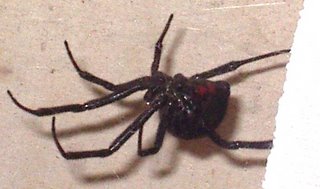 Yesterday afternoon, while re-shooting some of my scrolls with improved lighting, I noticed a Black Widow sleeping in its web, at the edge of the white canvas drop cloth I use behind my paintings when photographing. I immediately dismounted camera from tripod and closed-in on the arachnid for the telling shot.

Occasionally, excitement overrides fear as well as sensibilities. It had been a while since I felt even the slightest rush of danger and I suddenly recognized what had been missing these last few months. While living in on the eastern front of the Rockies where the prairie crashed into the mountains, I often recalled the song “” by Jon Bon Jovi. I lived in a town that had survived seventy of the last hundred years on the wealth of oil and natural gas. Even the rain had been bountiful to the point that the farmers would compete over who paid the highest taxes, as a source of pride; but then the wells suddenly ran dry and the droughts began:

During the daytime I often have trouble remembering exactly why I chose to live in the desert. Besides the random loose dog, I don’t feel the overwhelming power of stereotypical western freedom in - a town that is doing everything within its power to become the new . I’ve learned it’s quite normal to bump into the random celebrity while shopping in town. I also realize that movies now come first in this high desert region, as my wife recently found-out when traveling to the nearby town of (, not ). The first couple highway exits had been deftly closed for the purpose of filming a new Coen Brothers flick. This newly-found safety and sophistication of (and its neighbors) and its “evolved” society are sometimes too much to bear. When the intermittent interruption via danger to life and limb does not occur, I have to get my giggles other ways. A long day of painting that makes me forget about dinner often draws me back into my inner-world where action-painting is coupled with contemplation. This combination, I best enjoy while realizing my landscape works; maybe because it most easily returns me to the Sumi-e roots of my earlier paintings that were marked with the distinction of completion in a single sitting. I have a couch set-up a few feet back from where I paint. Once a work is done, I sometimes sit for an hour or more partaking in a drink and a drag while digesting the completed scroll.

Its after moments like this that I find myself staggering like a drunk as I fumble with the studio door and slip outside to watch the hours of darkness pass and embrace more stars than I ever knew existed. I have to admit there is more than the random hint of magic as I look across the wide-open night sky and feel the cool evening desert wind awaken my tired lungs. In it took the vision of nearby mountains to make me feel; in , I only need a clear sight of the constellations to remind me to believe. – DN

Posted by danielnorth.com at 8:47 AM

It's just a spider. Get over yourself.

You missed the point. A poisonous spider is the height of excitement in terms of danger in this newly-tamed section of the American West. Santa Fe (and New Mexico in general) is selling its soul to southern California, just so the Governor can invite stars like Jessica Simpson to dinner. The very concept of wildness makes one feel more alive; but any place can eventually fullfill that need, if one takes the time to look.

North,as true as you maybe, just remember that there are idiotic people in this world that can't grasp deep thought. personally, I completely understand your excitement, but you shouldn't waste energy on those who have no chance at comprehending intelligence.